Needlework was the common denominator of female experience in Georgian times and Jane Austen excelled with a needle. Here, our guest blogger Jennie Batchelor,  Professor of Eighteenth-Century Studies at the University of Kent, celebrates the considerable craft skills of our favourite novelist.

As we all know, Jane Austen was a highly accomplished writer. Not only did she produce books of extraordinary wit and breathtaking insight, but as her surviving manuscripts reveal, her penmanship was a neat as a pin. This is not something I can say about all the handwriting of all the women writers of her generation! 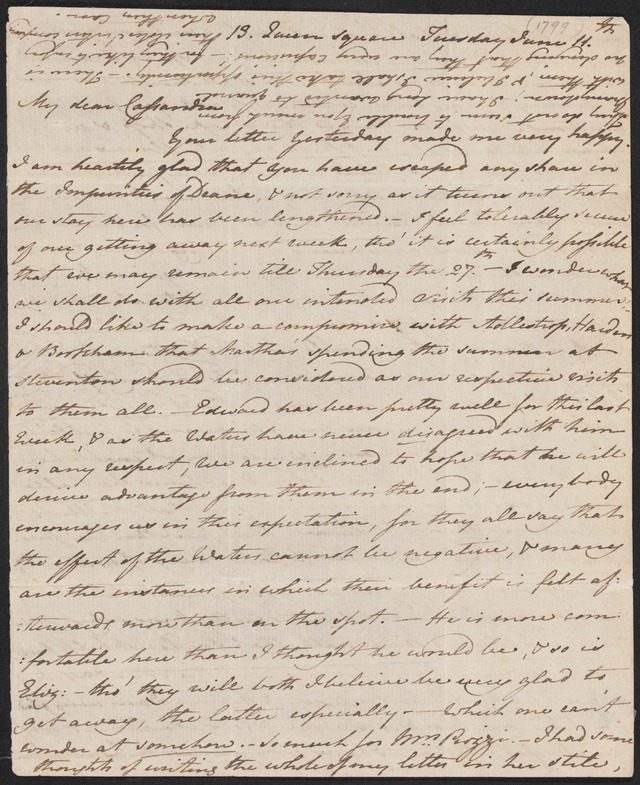 Letter from Jane Austen to her sister Cassandra, 1799 June

But Jane’s ‘handiness’ didn’t stop there. As her nephew, James Edward Austen-Leigh, wrote in his 1870 biography of his aunt, she was ‘successful with everything that she attempted with her fingers’, whether it was playing pick-up sticks with her nephews and niece, transcribing her novel, or folding and sealing correspondence. Above all, she excelled with a needle. She was particularly ‘excellent’ at the satin stitch, which as any embroiderer reading this will know, is a beautiful, precise and unforgiving stitch.

Had she lived longer, she would ‘almost have put a sewing machine to shame’.

We don’t need to take Austen-Leigh at his word. The stunning medallion quilt Jane co-created with her mother and sister still takes pride of place at Jane Austen’s House Museum. Meanwhile a housewife (or needle case) she embroidered with rows of zig zags as a parting gift for her dear friend Mary Lloyd demonstrates her technical competency. We cannot use these items to corroborate her nephew’s claims about Jane’s ‘excellent’ satin stitch, but a monogrammed handkerchief she made for Cassandra more than proves his point. If the gorgeous whiteworked Indian muslin shawl held by Jane Austen’s House Museum is the author’s work, as Austen family legend has it, then we can, I think, consider the case closed. She was truly excellent at her needle.

These items represent just a very small sample of the many clothes, accessories and objects that Jane Austen stitched across her lifetime and to which she often makes passing reference in her correspondence. Needlework was the common denominator of female experience in the time Jane Austen lived, although a girl or woman’s class and financial situation dictated what kinds of sewing she would need to learn and, of course, whether she would have to use her skills for a living or as a leisure pursuit. Jane Austen, though on the lower fringes of gentility, fell into this latter camp. 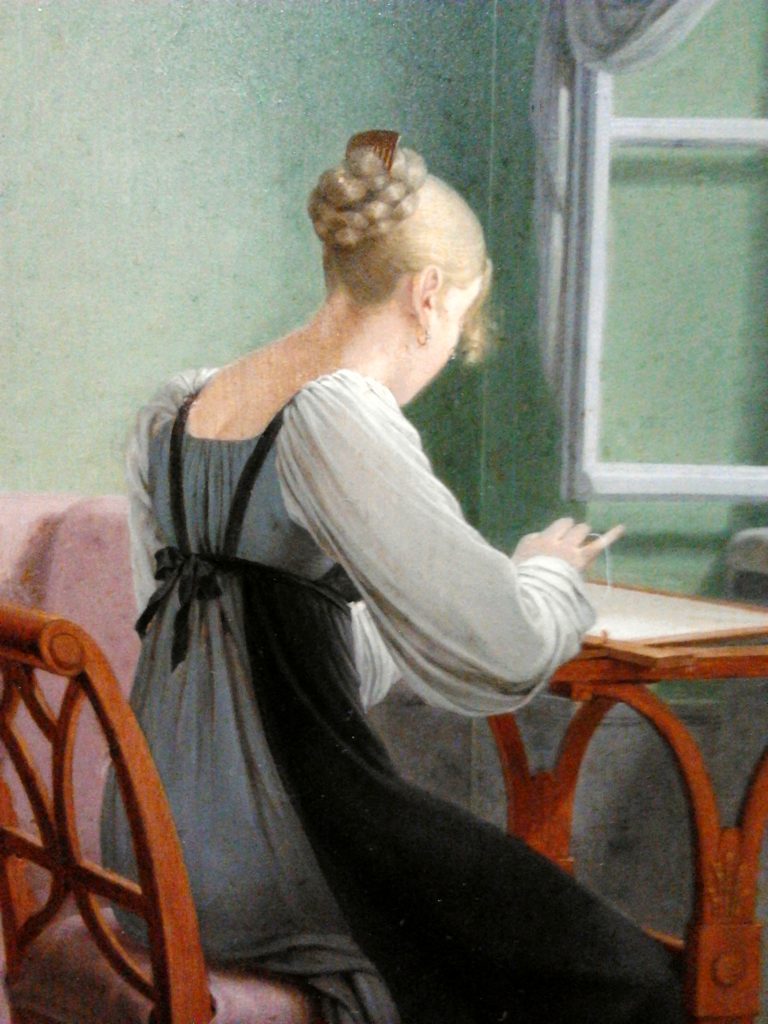 According to craft teacher and shop owner Hannah Robertson, girls of Jane Austen’s class were taught how to knit stockings before they learned to read. Not long after this, they moved on to samplers, the making of which required considerable manual dexterity. If Jane made a sampler, as she surely did, it sadly does not seem to have survived. Many of these needlework skills were taught at home, along with plain sewing – the making of household linen, undergarments and men’s shirts. Jane would have acquired some additional skills in ornamental needlework (i.e. decorative embroidery) at her brief period of formal education in the mid-1780s at Reading’s Abbey School, which taught needlework alongside more conventionally academic subjects such as geography and history.

Not all of Jane’s contemporaries took up their needle with as much enthusiasm as she did. The early feminist writer, Mary Wollstonecraft, was vocal in her objection to ornamental needlework.

She was not alone in thinking that the cultural insistence that women should occupy their leisure time in needlework and other accomplishments was a tactical move to prevent them from improving their minds.

But Jane was cut from a different cloth. Throughout her life, and despite her constrained budget, she had a keen interest in fashions and fabrics. Her letters are full of tales of upcycling caps and bonnets with new trimmings to refresh them for a new season, and the few scenes of stitching she describes in her letters are filled with laughter, conversation and pride. When, in the autumn of 1796, Jane described an especially busy time of making shirts for her brother, Edward, she could not resist telling Cassandra that she was ‘the neatest worker of the party’. She was also very proud of some caps that she and Cassandra made, but her sense of personal style was challenged when she found out that some friends wanted to copy the design. Jane was not too happy when her sister gave them the pattern. 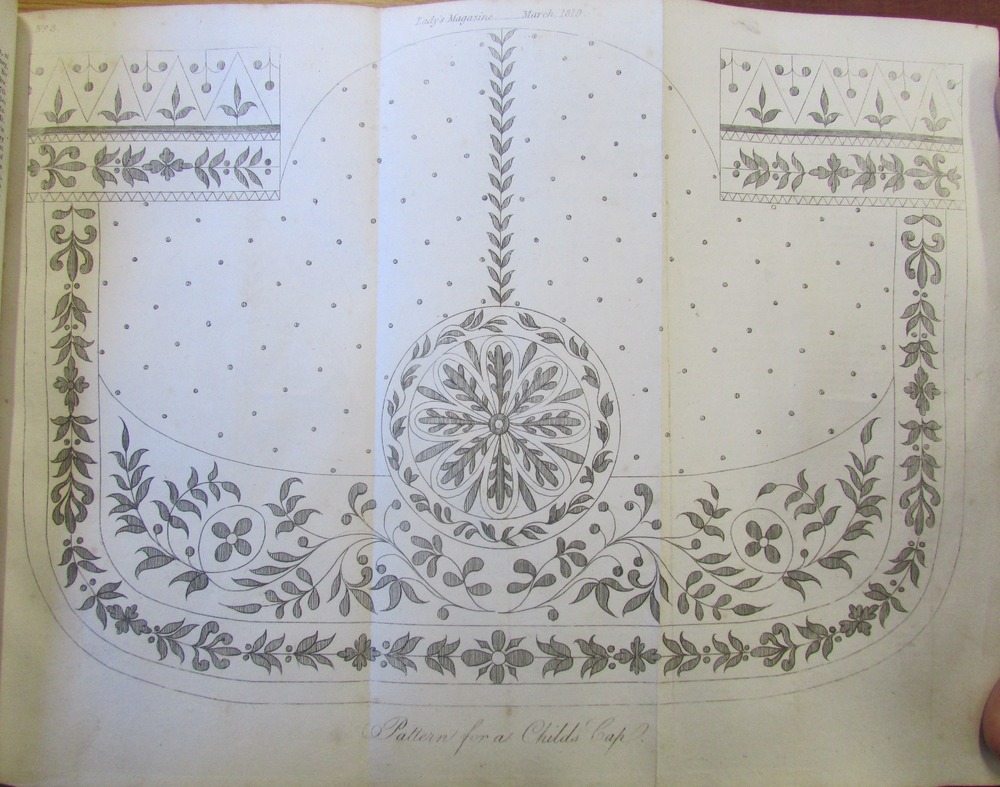 Jane Austen’s appreciation of needlework and other crafts – like Elinor Dashwood, she painted fire screens, for instance – permeates her novels. Mr Darcy might be sceptical about accomplished women who earn the title ‘no otherwise than by netting a purse of covering a skreen’, but her fiction takes a rather different view. Of course, Jane Austen’s novels champion intelligent women like Elizabeth Bennet, but unlike Darcy, or Mary Wollstonecraft for that matter, they don’t see needlework or craft skill as being at odds with mental refinement.

Bad crafters are often imperfect women in Austen’s novels. Lady Bertram is ‘as little use’ as the ‘long piece[s] of needlework’ she creates on her sofa in Mansfield Park. And Sense and Sensibility’s Lucy Steele is exposed by the filigree basket she cynically makes to win over Lady Middleton. By contrast, Elinor Dashwood, Fanny Price and Elizabeth Bennet are all skilled makers and have keener minds than many of the women around them.

Jennie Batchelor is the author and editor of eight books and many articles on women’s writing, dress history and needlework. Her most recent books include (with Alison Larkin) Jane Austen Embroidery (2020) and a book about the Lady’s Magazine (2022), the first modern women’s magazine and one that Jane Austen read. She is Patron of the Jane Austen Society Kent Branch and previously worked at Chawton House. Her on-line talk The Lady’s Magazine 1770-1832 and the making of literary history airs at 4.30pm on 1st November Tickets are free. Book your place here