In this month’s blog, Jennie Batchelor,  Professor of Eighteenth-Century Studies at the University of Kent, looks at how Jane Austen’s love of walking found its way into her novels and offers a glimpse inside the wardrobe of a fashionable Regency walker. 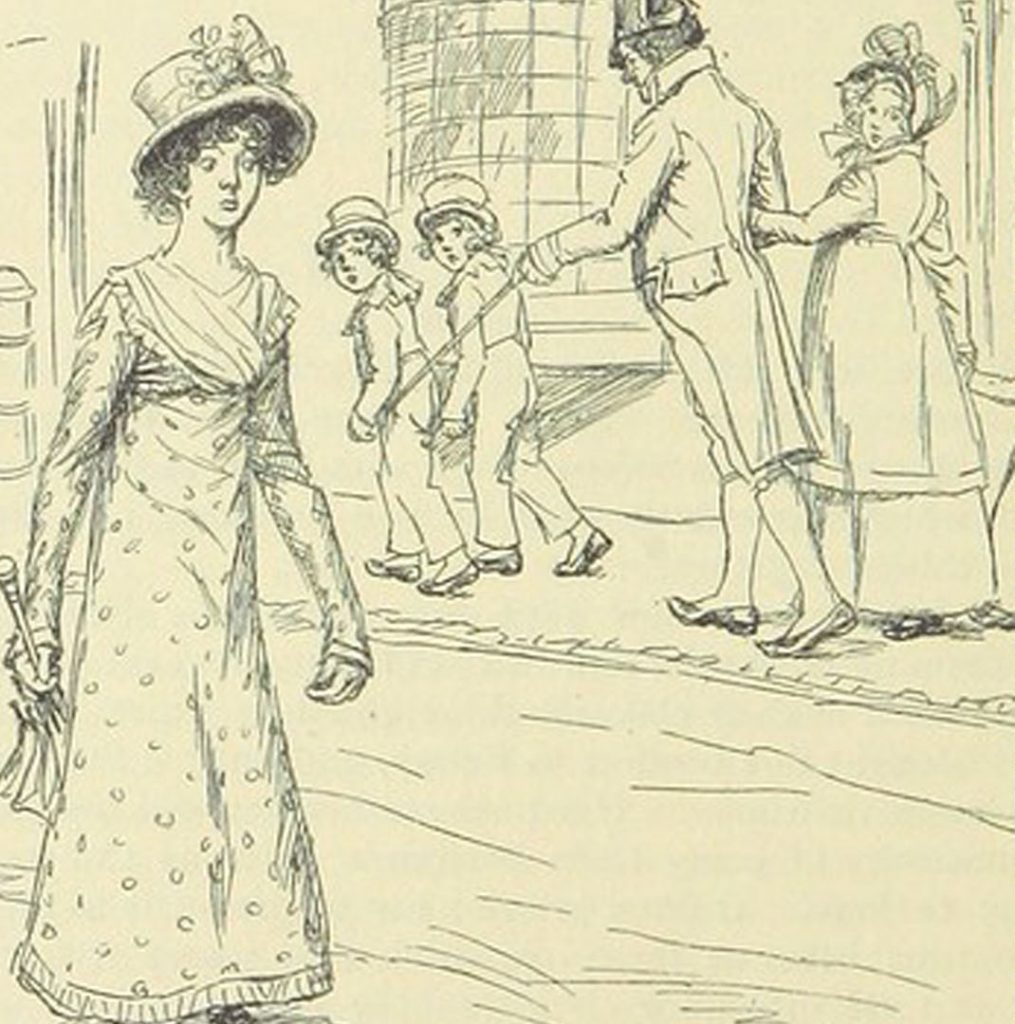 Jane Austen’s letters are full of passing references to walks in cities, towns, or the countryside. She wasn’t a fair-weather stroller, either. It took quite appalling conditions to deter this self-styled ‘desperate’ walker from venturing out on foot.

Austen’s love of walking finds its way into each of her six completed novels. Sense and Sensibility’s Marianne Dashwood, of course, loves being out alone in the countryside. That ‘excellent walker’, Elizabeth Bennet, thinks nothing of walking several miles to visit her cold-ridden sister, Jane, in Pride and Prejudice, even though her petticoat ends up caked in inches of mud, much to Caroline Bingley’s horror. It’s true that Austen sometimes presents walking as a dangerous pursuit for women. Harriet Smith, for instance, gets into great distress after encountering a group of children who ask her for money in Emma. And Louisa Musgrove endures a significant injury while out on the Cobb at Lyme Regis in Persuasion, although strictly speaking, jumping is to blame here rather than walking.

Much more frequently, though, Jane Austen uses the love of walking to suggest a character’s integrity. We trust Mr. Knightley partly because of the steadiness of character he shows by walking miles a day rather than hopping into a carriage from Surrey to London to get a haircut like French Churchill does. We similarly admire Anne Elliot, in contrast to her self-absorbed sisters and father, because she prefers walking around the streets of Bath rather than seeing the city from the vantage point of a chair or carriage. 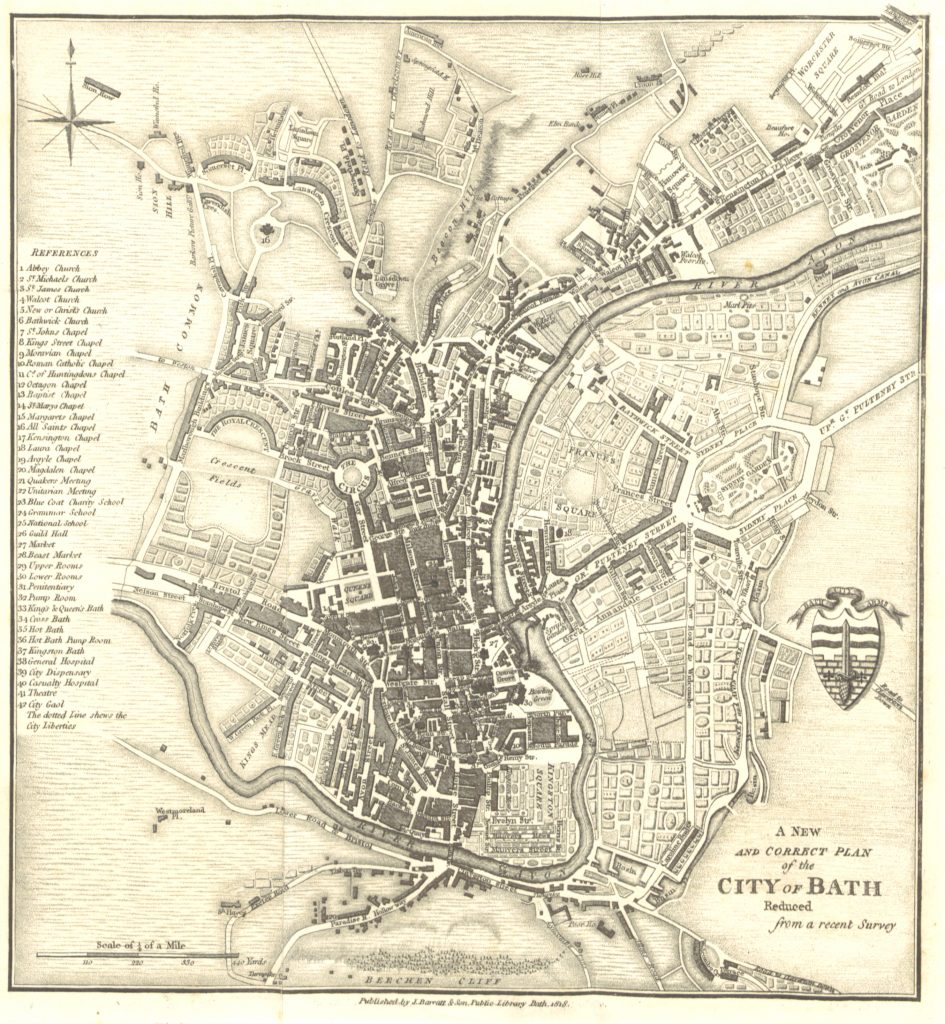 A New and Correct Plan of the City of Bath 1818, from the Mechanical Curator Collection, released to Flickr Commons by the British Library

Indeed, of all her novels, Persuasion contains the most references to walking, especially around Bath. The second half of the novel is littered with building and street names and architectural features that residents and visitors to the city would instantly have recognised. From Old Bridge to Milsom Street, Union Street and Gay Street, where Austen herself lived for a short time, we stroll through the city with Anne. We learn more about her and those she meets in her street encounters, particularly Admiral and Mrs. Croft, who we are told, walk around Bath ‘in happy independence’ as they bump into acquaintances, shake hands, and make conversation.

And it is in the streets of Bath, rather than in a drawing room, that the love story of Anne and Captain Wentworth finally reaches its resolution as the couple turn off Union Street to a ‘gravel walk, where the power of conversation would make the present hour a blessing indeed.

With the exception of Lizzy Bennet’s muddy petticoat, however, Austen doesn’t usually tell us what her characters are wearing on their strolls. There are a few hints in Persuasion, mostly to underline the fact that almost all of the Bath walks take place in autumnal rain. In fact, the reader’s first sight – or sound – of Bath is the clinking of pattens in the streets. Pattens, which we know Jane Austen and her sister Cassandra wore sometimes when walking – were overshoes on raised iron rings to protect women’s footwear from muddy or damp streets. They are music to Lady Russell’s ears but give the homesick Anne a headache.

Beyond the pattens and Captain Wentworth’s umbrella, which he has bought specially for his Bath trip – few references to clothes are found in the novel. But we know from her letters that Jane Austen was keenly interested in dress and fashion and, despite her limited finances, always did her best to be suitably dressed for any occasion.

Women’s magazines from Jane Austen’s time contain hundreds of images of clothing designed specifically for walking. Known as walking dress – or the grander sounding, promenade dress – these garments were designed to offer women greater protection from the elements than typical gowns of the period. Walking dress was more functional than indoor wear but, as these lovely engravings from the Lady’s Magazine (1770-1832) make clear, they did not need to be any less fashionable. 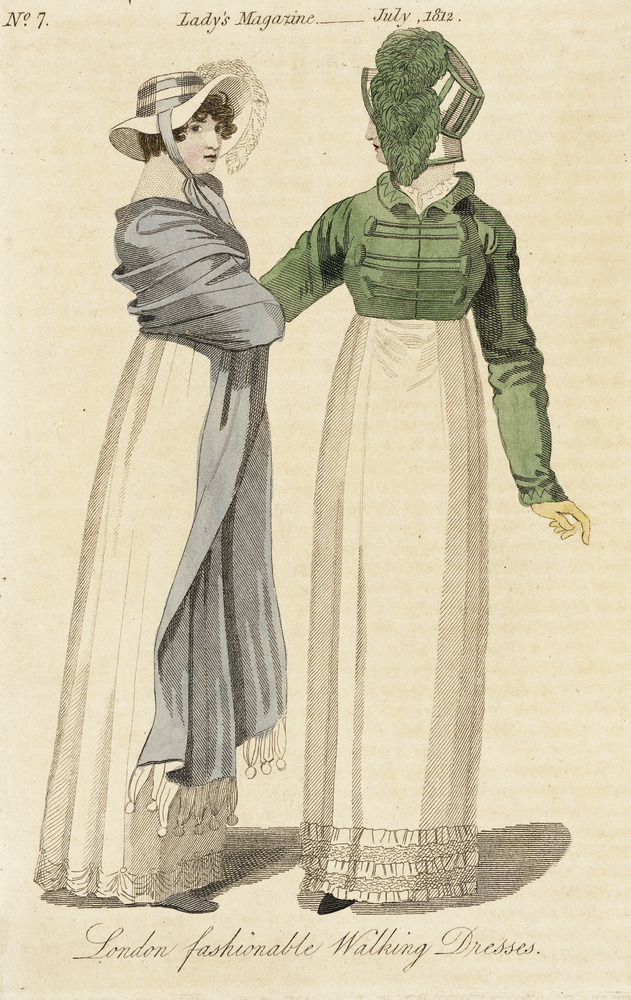 Women’s walking dress comprised a gown, some kind of outerwear over the top, a hat or bonnet, heavier shoes or boots made from leather rather than the lighter fabric shoes generally worn indoors, and gloves. Seasonal variations occurred, however, with heavier fabrics, furs, and materials  coming into their own in the autumn and winter months and the types of outerwear changing in length and style. The lovely pair of walking dresses for July 1812  pictured above, illustrates some typical summer styles. Both women wear half boots and chip bonnets and floor-length, light muslin gowns, which are made suitable for the London streets and parks by the addition of a scarf-style, tasselled shawl (left) and a military-inspired spencer (right).

Pelisses were also popular walking or outer wear. Practical in design and adaptable in practice, pelisses were coatdresses, which could be made to different lengths, have different collars, and be made to completely conceal or partly reveal the gown underneath. In the fashion pate for November 1819, we can see an extravagant walking dress for cold weather, featuring a full, open pelisse trimmed with ermine that matches an oversize muff. Whoever wore such a gown surely wanted to be seen as much as to see. While Anne Elliot wouldn’t have had the money or inclination to wear such an outfit, she no doubt would have seen many such figures as she walked the streets of Regency Bath. 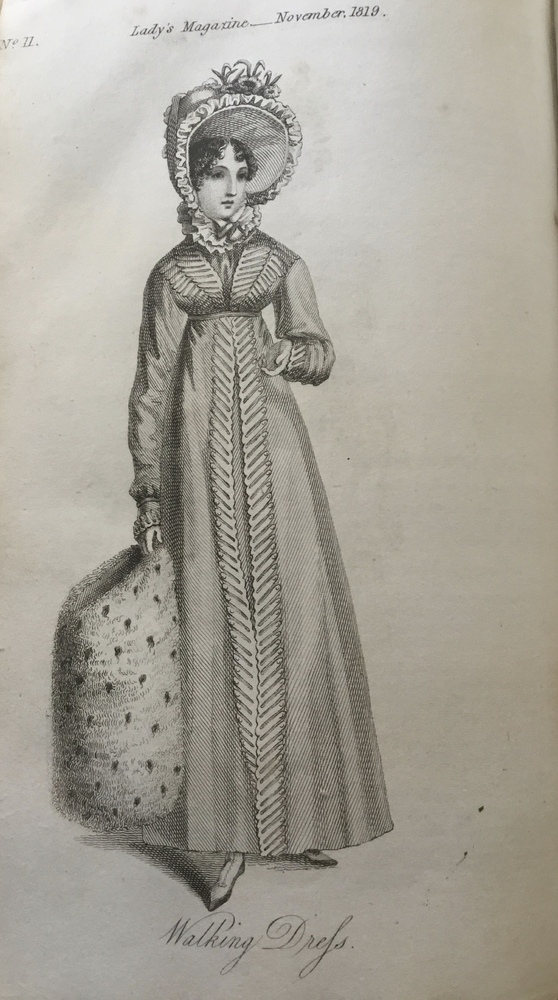 The Lady’s Magazine (1770-1832), “Walking Dress (November 1819),” Fashion in the Age of Bridgerton: Plates from the Lady’s Magazine, accessed November 7, 2022, https://fashionintheageofbridgerton.omeka.net/items/show/52.

Why not done your best walking clothes and follow in Jane Austen and her characters’ footsteps on our guided walking tours of Bath? Find out more here

Jennie Batchelor is the author and editor of eight books and many articles on women’s writing, dress history and needlework. Her most recent books include (with Alison Larkin) Jane Austen Embroidery (2020) and a book about the Lady’s Magazine (2022), the first modern women’s magazine and one that Jane Austen read. She is Patron of the Jane Austen Society Kent Branch and previously worked at Chawton House.