There's Something About Mary

‘Our Bath base means that we are uniquely placed to create truly evocative tours of Jane Austen’s world,’ states our website proudly. Austen certainly embodies one end of the spectrum of early-nineteenth century fiction, that of romance and satire. But did you know that Bath also played host to another novelist who wrote the defining work of the century in the budding fields of gothic, horror, and even science fiction? This week, our guest blogger Dr. Gabrielle Malcolm, is celebrating our home city’s other literary heroine, Mary Shelley….

Mary Godwin, better known as Mary Shelley, spent half a year from 1816 to 1817 living in lodgings in Bath. In that time, she wrote and edited the first quarter of Frankenstein; or, The Modern Prometheus, and began the development of the next phases of the novel which was eventually published in January 1818. 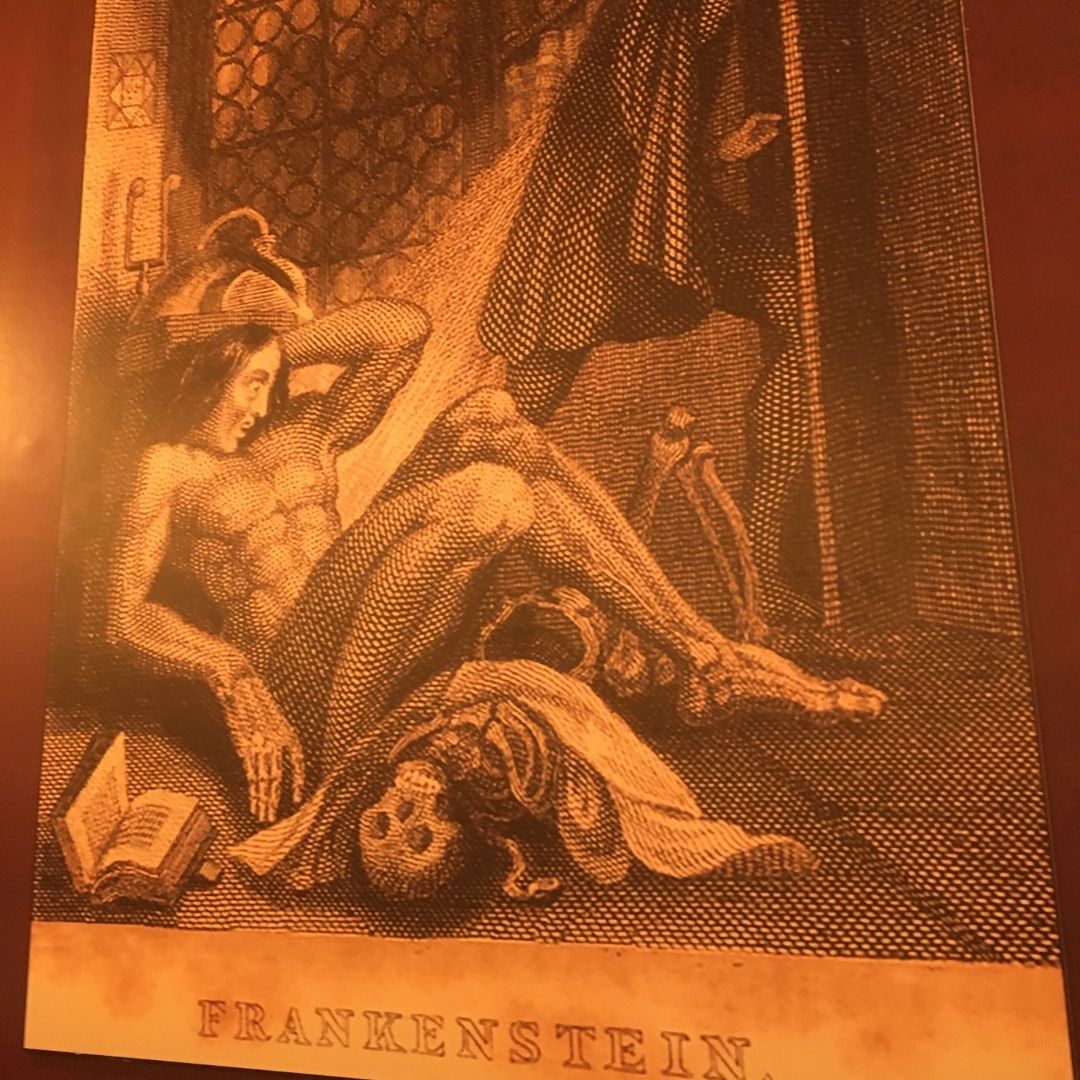 Now, you might think you have a difficult family, and maybe that is true. We all have our challenges. As Leo Tolstoy was to write in Anna Karenina, later in the century: “All happy families are alike; each unhappy family is unhappy in its own way.” Mary Shelley, one could argue, had a unique set of challenges.

A little background here. Mary Godwin was born to Mary Wollstonecraft and William Godwin in 1797. Both her parents were radical philosophers and unmarried at the time of her birth. Within a month, however, Wollstonecraft died from complications. Young Mary grew up in a world where she was reminded of how her own life had cost that of her mother. Godwin, after eschewing the institution of marriage where Mary’s mother was concerned, married a neighbour, Mary Jane Clairmont, when Mary was four years old. Mary Jane Clairmont-Godwin was to have a difficult relationship with her step-daughter, and to compound the situation she brought her own daughter Mary Jane with her. Young Mary Jane, when she grew older, preferred to go by the name Clair Clairmont. With all the Marys in the household, it’s understandable that they resorted to nicknames.

When Mary ran off with Percy Shelley in 1814 (at just 16 years of age), her step-sister went with her to Europe. A fraught family dynamic grew even more difficult when Clair went with them to stay near Lord Byron at his Villa Diodati in Switzerland in 1816. One of Percy Shelley’s friends, the barrister Thomas Hogg, joked about ‘Percy and his two wives’. Rumours circulated at the time that Percy was having an affair with Clair whilst with Mary. In addition, his wife Harriet Westbrook was still alive. Clair did have a love affair with Lord Byron over that summer of 1816, so that when they returned to England, she was pregnant with his child, a daughter Allegra. 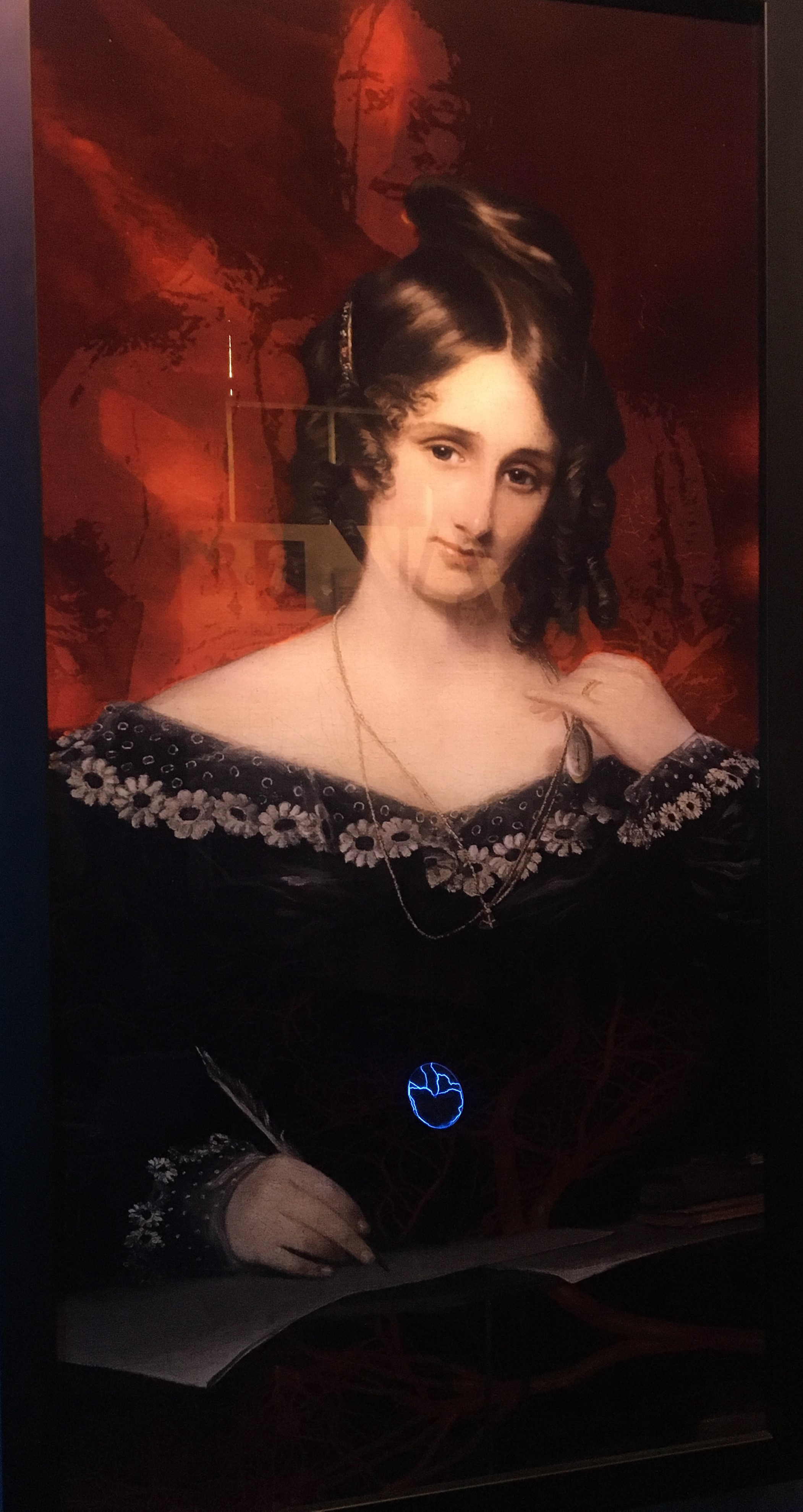 Mary Shelley’s time in Bath, therefore, did not comprise a holiday among society. On the contrary, when she arrived in Bath on Tuesday 10th September accompanied by her step-sister. it was in order to lie low and hide the fact of Clair’s situation. They took rooms on the Abbey Churchyard Square, where the current Victorian Pump Rooms now stand, and at New Bond Street. Mary recollected her step-sister ‘looking in on her’ often during their stay, so she clearly had to endure Clair’s company and manage the family situation, whilst Percy went in search of financial support and to help fix the aftermath of yet more family tragedy. In this period, they were confronted by the suicides of both Mary’s half-sister, Fanny Imlay, and Percy’s first wife Harriet.

Challenge heaped upon challenge and tragedy upon tragedy for Mary Shelley. But something else had happened across that fateful summer in Switzerland, aside from hurtful infidelities and reckless love affairs. Byron had set them all a challenge: “We will each write a ghost story.” Mary embraced the project. She drafted an idea, based upon a dream. Haunted by so much loss since birth, she channelled her intelligence and creativity into her first novel. 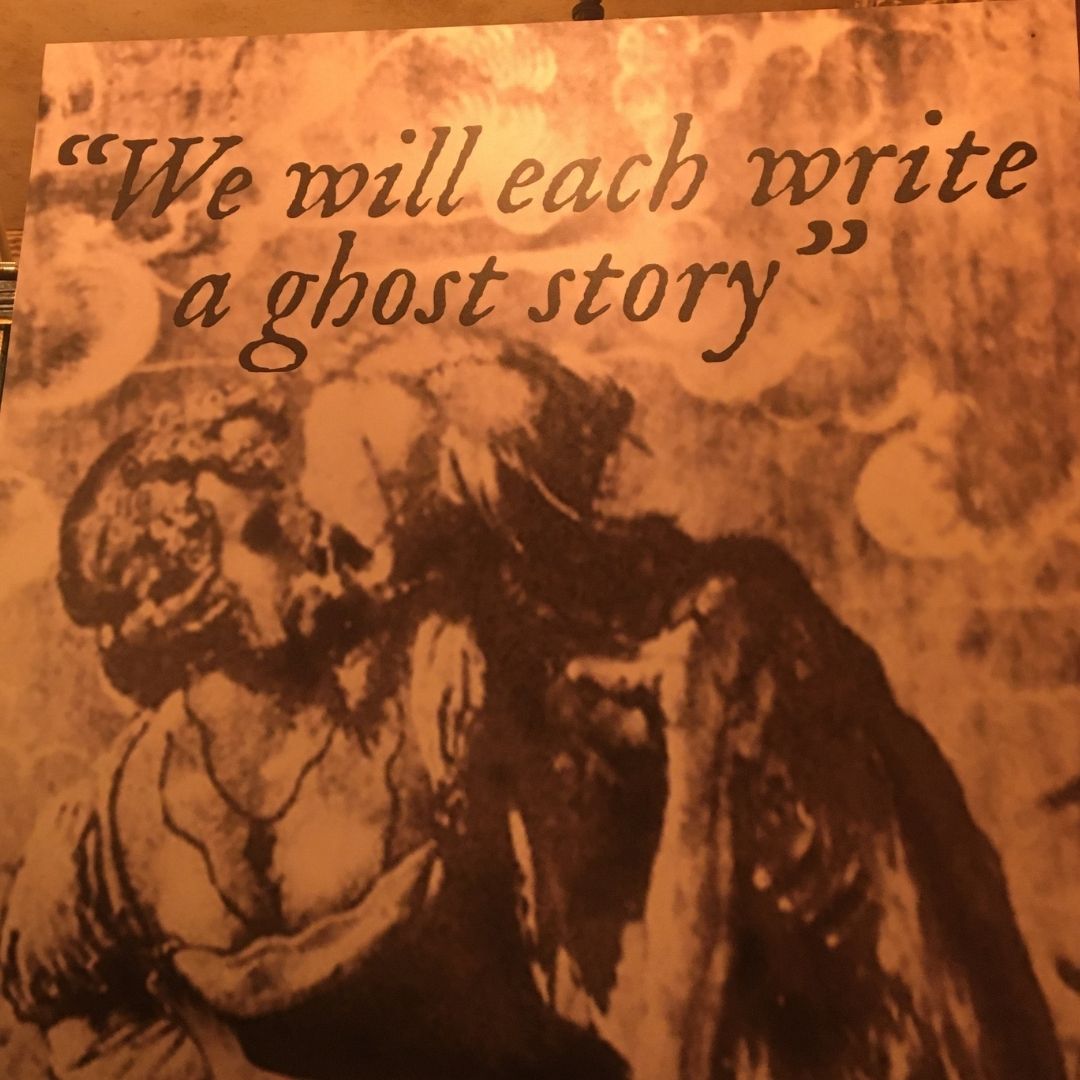 And what a novel. A literal game-changer. Frankenstein could be read as the first science fiction novel, the events of which rely upon speculative and theoretical science and a main character who embarks upon experimentation. Again, remembering that she was just nineteen when she wrote it, it is startling, mature, philosophic, and gripping. Within a year of its anonymous publication, it was a hit. After an initial print run of 500 copies, it was widely circulated, and new editions followed in 1823 and 1831. Part of its success is down to the popularity of the stage versions that happened almost immediately. Mary approved of these and was flattered by their reception. They helped to bring Frankenstein and his Creature to life. Raw and shocking, Shelley’s novel is a globally acknowledged masterpiece. The conditions of its composition were, to say the least, both agonising and challenging.

With her eventual (albeit sadly short-lived) marriage to Percy, Mary was reconciled with her father. His tuition and guidance of her meant that she received a rigorous, if informal, education denied to most girls of that time. She made use of this to be a writer and support herself and her children after Percy’s death by drowning in 1822. William Godwin accepted his daughter, and importantly  acknowledged her greatness in the field of literature. He wrote to her in 1823:

[Frankenstein] is the most wonderful work to have been written at twenty years of age that I ever heard of.

Bath now celebrates Shelley’s connection to the city with the House of Frankenstein, an immersive attraction, just a few doors down from The Jane Austen Centre. It is quite something, that the two famous female novelists of the early nineteenth century, who did so much to change the landscape of culture, are celebrated on the same street in the same city. The extreme ends of the fictional spectrum are on show in the two venues. 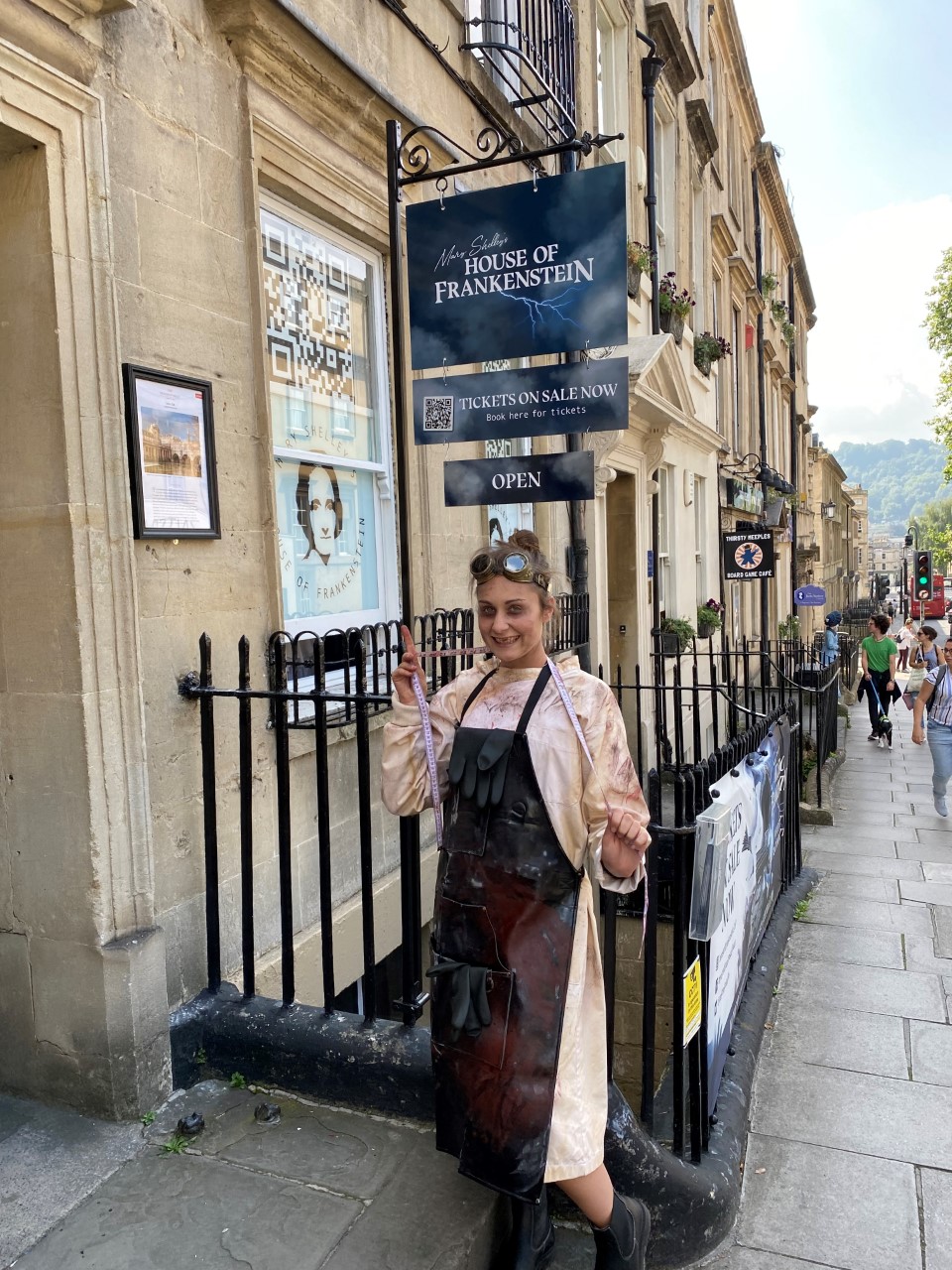 Dr. Malcolm is an editor and author of There’s Something About Darcy (2019, Lume). Her debut Science Fiction novel will be out later this year with Goldsmiths Press. Gabrielle will be talking about Mary Shelley and reading from Frankenstein as part of our sister company ECT Travel’s  Fright Night weekend in October 2022. Find our more here

You can also hear Gabrielle talking about Popular Monsters at the House of Frankenstein on 28th and 29th January. Find out more here