With his series of seasonal stories, Charles Dickens very successfully laid claim to Christmas, and ever since we have been led to believe that all we know and love of the season is a Victorian affair. Yet, writes freelance journalist and author Sarah Jane Downing in this month’s blog, there are many traditions that we hold today that would have been familiar to Jane Austen and her contemporaries. 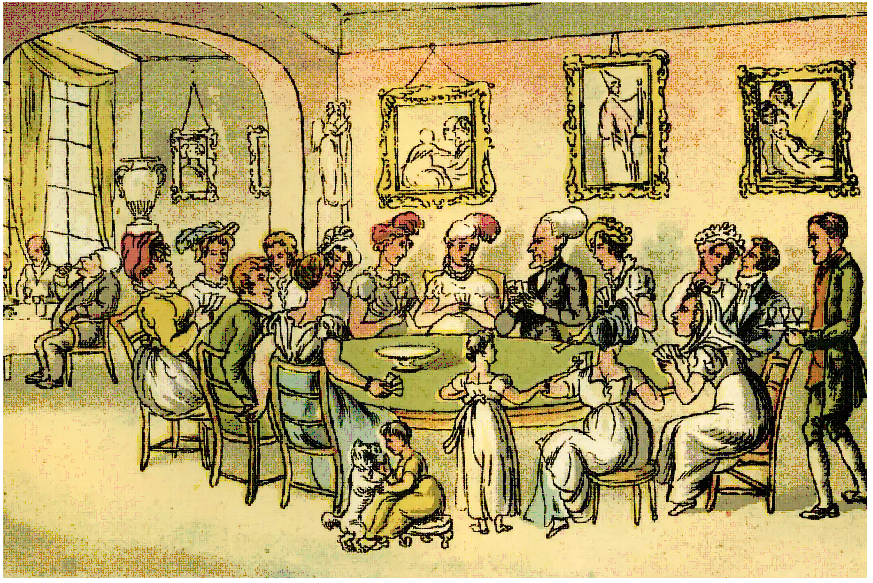 For Georgians, eating, drinking and being merry were the order of the day with events throughout the twelve days of Christmas and often some time before. There would be parties and dancing at home with the family with charades and games that could become quite boisterous and messy! ‘Bullet Pudding’ was a favourite which involved a pyramid of flour built upon a large pewter dish with a bullet placed carefully on the peak. Each player would remove a slice until the bullet fell and the person that made it fall would have to poke though the flour with their nose until they could retrieve the bullet with their mouth. Even more messy and not a little dangerous was ‘Snap Dragon’ where a large dish of raisins steeped in brandy was set alight and each player had to scoop and eat as many as possible without getting burned!

Saint Nicholas was commemorated on December 6th and this often marked the first get together and gift giving of the season. In most instances gift giving was a personal tribute – a pretty trinket made with kind thoughts from a dear friend. Jane’s niece Emma Austen Leigh kept a marvellous record of the Christmas gifts she received from 1813-1821 with many items listed as having been handmade by the giver. In 1817 she received a green silk and silver purse – green was a popular colour for gifts as the colour denoted true love and esteem. Unfortunately not all these carefully made tokens were appreciated, a letter from Lord Bessborough during the 1790s entreated the giver: ‘I desire the favour of you not to send me the Purse you mention, for I have, I believe, twenty by me which are not of any use. It has been the fashion of ladies to make purses and they have been so obliging as to give me a great many ’ 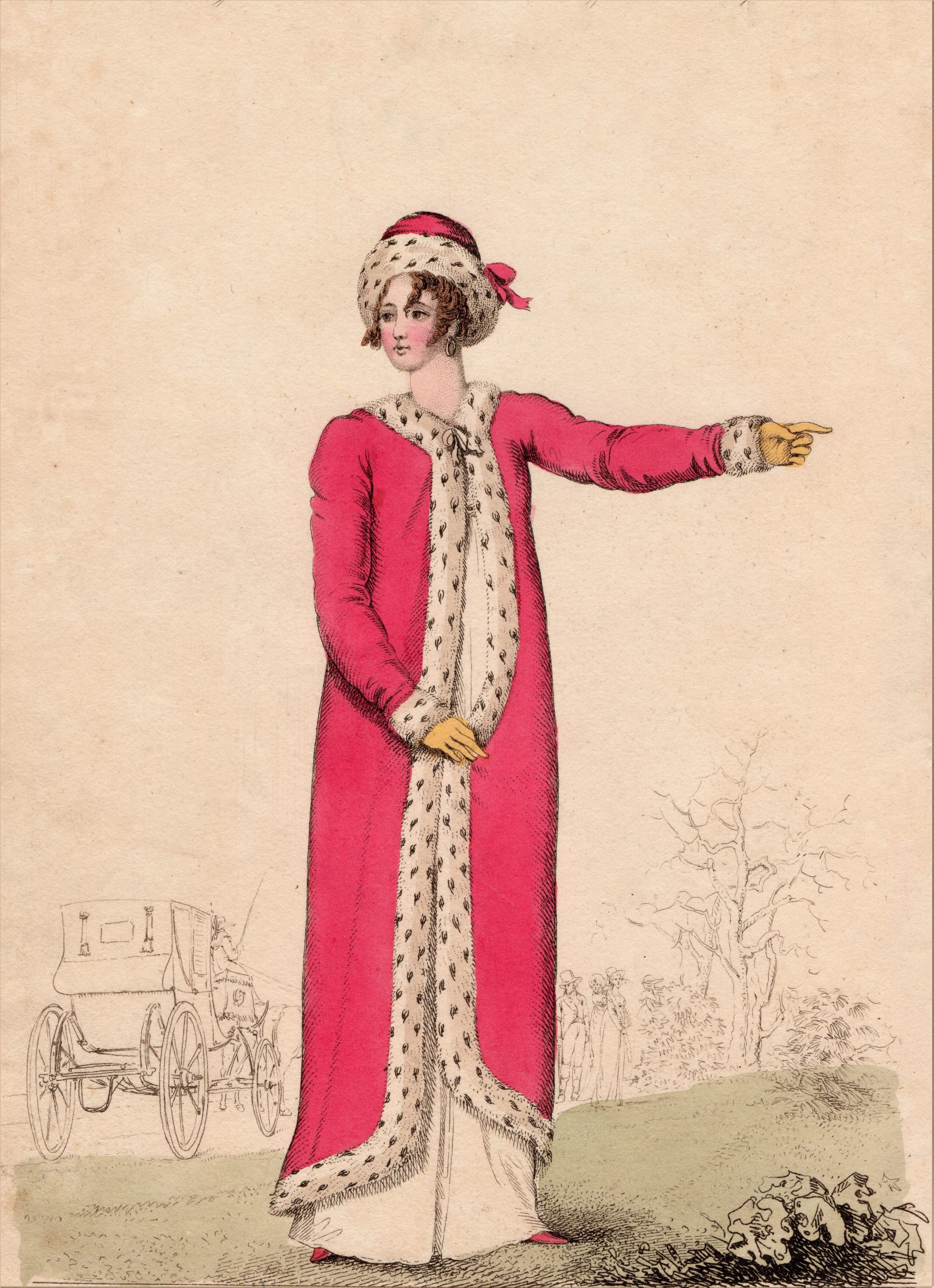 A new gown was a rare pleasure for Jane and Cassandra who had to carefully consider each purchase, but on 28th December 1798 Jane wrote to her sister that their brother Frank had been promoted to the rank of Commander saying; ‘if you don’t buy a muslin gown on the strength of this money and frank’s promotion, I shall never forgive you!

Of course gowns would have to be planned months in advance as ‘a gown’ simply referred to the 7-10 yards of fabric required to make up a gown. Once the fabric was procured a dressmaker had to be appointed, a design chosen, suitable trimmings found and time made for fittings.

Although much of Christmas would be spent at home with family and close friends, there would usually be plenty of parties and dinners to go to and at least one Christmas ball. It was important to choose a ball gown that was not only flattering but would look pretty and remain fresh even when dancing energetically for hours on end. On Christmas Eve 1798 Jane writes to Cassandra that at a Christmas ball ‘There were twenty dances, and I danced them all without any fatigue.’ 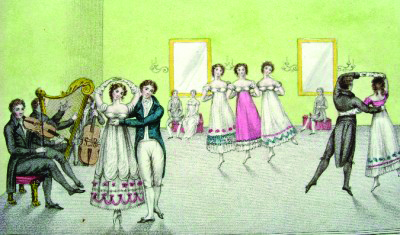 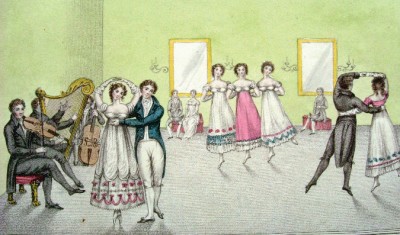 This was nothing to the excitement she had experienced at Christmas three years earlier when she had met Tom Lefroy. She confided in a letter to Cassandra in January 1796; ‘imagine to yourself everything most profligate and shocking in the way of dancing and sitting down together’. Having danced together at three balls and looking forward to doing so at a fourth they had quickly become quite enamoured of each other. Sadly Jane’s letters do not reveal how she managed her limited wardrobe to appear attractive and stylish at four balls with the same company in such quick succession, but given her proclivity for trimming caps and headdresses it is likely that headwear was the focus for change. She did however add: ‘at length the day is come on which I am to flirt my last with Tom Lefroy and when you receive this it will be over. My tears flow as I write at the melancholy idea.’

Amateur theatricals were another key aspect of Regency Christmas festivities. Staging even a few scenes from a play would bring a lot of fun and laughter, and would allow a fantastic excuse to flirt or to spend some precious unchaperoned moments with a prospective suitor.

This could also be a potential reason for reticence.  On November 16th 1787 Jane’s aunt Eliza Comtesse de Feuillide wrote to her prim cousin Philadelphia Walters: You know we have long projected acting this Christmas in Hampshire and this scheme would go on a vast deal better would you lend your assistance … on finding there were two unengaged parts I immediately thought of you…and assure you how very happy you will make them as well as myself if you could be prevailed upon to undertake these parts and give us all your company

It is unclear whether 19-year-old Philadelphia was painfully shy of the idea of participating, as Fanny Price was in Mansfield Park, or if she was terrified of the disapproval of her prudish domineering mother, but her reluctance was clearly irritating to Eliza not only for her barely polite transparent excuses about not wanting to ‘appear in public’ but also as it prevented finalising the arrangements of what should have been the heart of the festivities.

Twelfth night balls were the grand finale to the season to celebrate the epiphany and to say a fond farewell to guests. There was a huge cake baked with a bean, that when found, denoted the person to be crowned King to rule for the evening. Cards were drawn to give everyone their partner and their role for the night. Jane enjoyed such festivities and was recalled by sir William Heathcote who attended a twelfth party with her when he was a boy that she drew the character of ‘Miss Candour’ which she enacted with great spirit taking people aside to comment on their dress or making outrageous comments in loud whispers for all to hear! With such games and drinking and dancing until dawn inevitably twelfth night frequently became a riotous occasion. Such behaviour piqued the disapproval of Queen Victoria, and be 1870 twelfth night was one Christmas tradition that the Victorians had successfully stamped out. 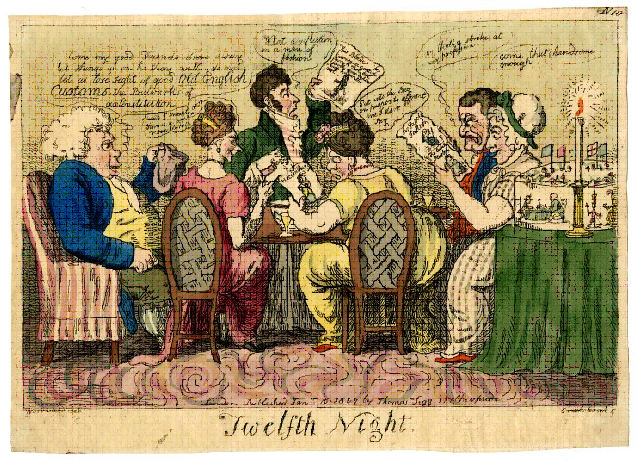